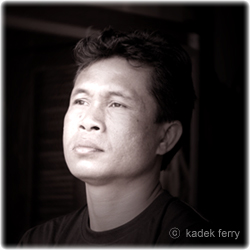 I Ketut Suanda is the leader of Gamelan Cendana. He is a dancer, a gamelan musician and also a Bali comedian. He comes from Banjar Batur, Batubulan Village, Gianyar. Since really young age Suanda has already pursue the world of art, as the influence of family environment and his village - the Batubulan, a village where its people are very active in art.

Since the age of five years Suanda was already showing his talent in art. Although still a child, but he was known as a little boy who able to play well parts of the music accompaniment of the Ramayana Ballet. Also in his childhood, Suanda had been involved as a dancer playing the character of the Peoples. From this period Suanda has found his joy that he lived until now.

Adolescence is a period which is also giving meaningful experiences for Suanda. After graduating from junior high school, he continued his school to SMKI (now SMK Negeri 3 Sukawati), than to learn in a formal school, here he can also further express himself in art, in the field of dance, musical, or other art with the artists students of this school . In the eyes of his friends, I Ketut Suanda is a rounder artist figure. In addition to dance and to play Balinese gamelan music, he was also actively involved in a band activities, Break-dance, and Pantomime. After graduating from SMKI, he continued his education to ASTI (ISI, Indonesia Arts Institute Denpasar), with majors of Karawitan. 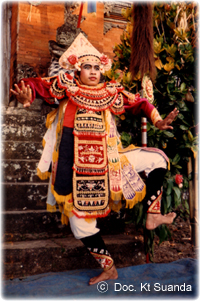 From his efforts and persistence learning Bali dance, on his young age Suanda several times had ever won the dance competition in a variety of cultural festivals. Some of these included winning the 2nd prize on Dance competition, performing the Jauk Dance on Bali Arts Festival in 1990, in this event Suanda was awarded by the Governor of Bali, and in the same year winning 1st prize on National Arts Festival, Jakarta, performing the Baris Gede Batur dance. 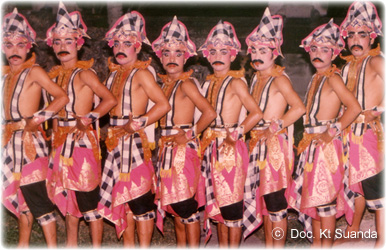 Baris Gede Batur (1990), Suanda and friends (third from the right)

During the lecture, though Suanda majored in gamelan music program, but he still elaborated in dancing activities. Several times he performed with the Representative Group of Gianyar regency on Gong Kebyar Festival on Bali Arts Festival both as a dancer or gamelan musician. In addition Suanda also has performed several times at international level. They are: in 1994, 1996, joint teams with STSI, arts touring to Europe. In 1997 touring to Japan, and in the same year with the Local Government of Gianyar to India

Although Suanda actives in gamelan music program, but in recent years he is more known as a Bali comedian named Cedil with his unique voice and special costume. Cedil is so phenomenal. Suanda performed his first show with a figure of Cedil in 1998 on a staging of Drama Dance Performance by HPI (Indonesian Guides Association), in Jagapati, Badung. 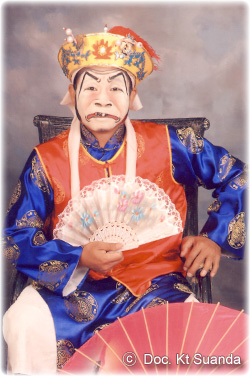 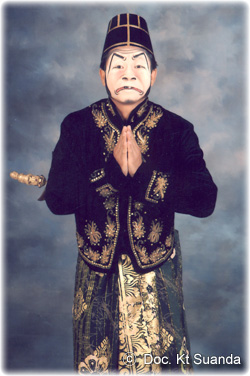 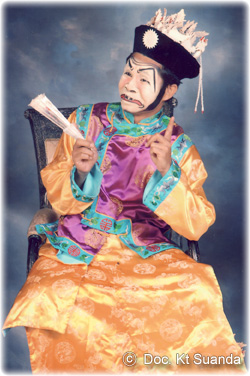 In subsequent years, Suanda is preoccupied of his Cedil figure. Cedil appeared in various comedy staging. Cedil also had performed to foreign countries on several occasions along with other Balinese artists. 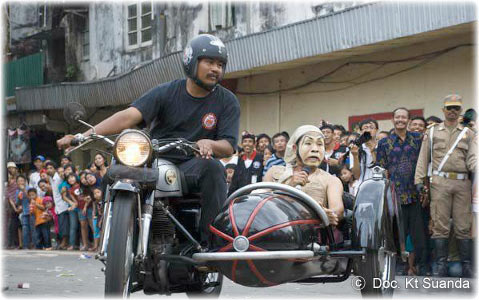 And in 2009 he was invited by a community of artists from Japan. Here he performed as a Bali comedian and provided art workshops in front of academics, artists, and art leaders. On this trip, the Japanese Artists appreciated Cedil as a great Bali comedian who stays in between tradition and modern, which means that he is able to portray his Balinese tradition that is still inherent on him, on the other hand Cedil also a globally minded person. 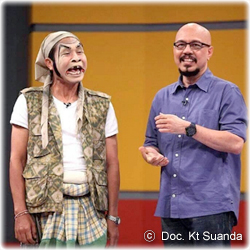 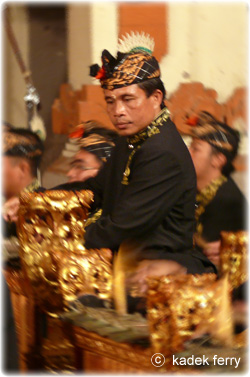 Although Suanda is often preoccupied with the figure of Cedil, but he is still actively leading the Gemelan Cendana, a group that he formed in 1992. And even in recent years he re-creates several new works. As a gamelan musician Suanda has composed some instrumentals and dance accompaniments. Some of these include the gamelan of Princess Hana dance, Puspa Buana dance, Basundari dance, Cedil dance, and Bebarongan Instrumental "Ulinan". All these ever been performed by his group, Gamelan Cendana, in the Bali Arts Festival (PKB).